3 March, 1930
Ford C-9, 29-221, c/n 81, assigned to the AC Detachment, Bolling Field, Washington, D.C., piloted by Newton Longfellow, suffers damage in taxi accident in which it went up on its nose at Mitchel Field, New York. 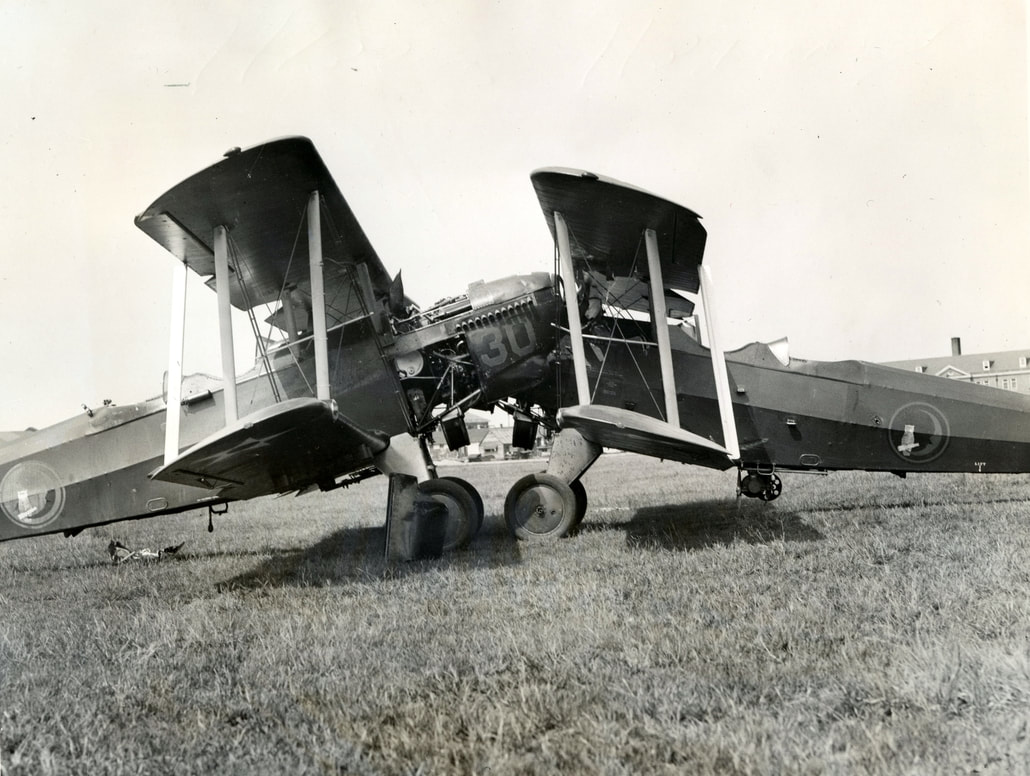 Two Douglas 0-25cs from the 5th Observation Squadron collide at Mitchel field. One was taxiing out for takeoff when it was struck by the other after landing.

341229  O-1G 31-494  99OS  Mitchel Field, LI, NY  LACNO 3 Olsen, Albert F. USAIL Muni Airport, Chicago, IL
23 February, 1934
Three Air Corps crew are forced down in an aircraft in the Atlantic off of Rockaway Point, New York, whilst en route from Mitchel Field, New York, to Langley Field, Virginia, to pick up mail planes. Planes and vessels searched the sea off New York for the body of Lieutenant George F. McDermott, described by the press as the fifth flier to die in connection with the army's task of carrying the air mail. Forced down amidst "crashing waves", McDermott's two companions, Lieutenants J. H. Rothrock and W. S. Pocock, were picked up by the U.S. Navy destroyer USS Bernadou. They were reported to be "weak from exposure." The vessel could not find McDermott, nor salvage the disintegrating plane. "McDermott, whose family lives in Greenfield, Pa., slipped to his death in the icy Atlantic hours after the plane faltered and alighted. His companions, clad in heavy flying suits and weakened by exposure, could not help him." McDermott, "23, battled side by side witht [sic] his companions, Lieut. J. H. Rothrock and Lieut. W. S. Pocock, for five hours on the ice-covered wings of the plane before he died, the sixth to lose his life in connection with preparations for the army to fly the mail. Once, in the almost super-human struggle of the three to cut loose the craft's motors and keep afloat, he fell into the choppy sea. Doggedly, he swam back to where his companions could pull him aboard again. The could [sic] was intense and a stiff wind whipped the waves high. Again McDermott's grip failed and he slid away from his companions and into the water, apparently unconscious. Rothrock and Pocock couldn't reach him, and within a moment he had disappeared. Ten minutes later rescuers from the destroyed [sic] Bernadou - leading a fleet of ships and planes which had sought for hours to reach the pilots - reached the almost submered [sic] craft and took off Rothrock and Pocock. James H. Rothrock was listed as the pilot of this flight, in Douglas C-29 Dolphin, 33-293,[240] c/n 1184, one of only two of the C-29 amphibious flying boats acquired by the Air Corps. An Associated Press wire photo is published 2 March 1934 showing Pocock and Rothrock recovering in hospital.

381212  BC-1 38-379  5BS 9BG Mitchel Field, NY  LACNO 4
Spilman, Lawrence A. USA CT Norwalk, CT
18 November, 1938
Douglas B-18A Bolo, 37-468, of the 99th Bomb Squadron, on a flight from Mitchel Field, Hempstead, Long Island, New York, to Maxwell Field, Alabama, crashed 7 miles NE of Lagrange, Georgia, in a night accident in rainy weather that blanketed most of the Southeast. Five of six crew, and two military passengers, were killed when the plane struck trees, possibly due to a downdraft. A dying member of the crew provided details of the crash before he expired. Pvt. Joseph Nanartowich said "We were flying low to get under the ceiling. It was raining. Suddenly we hit a rough spot and bounced. Next thing I knew we were plowing through the trees. There were no mechanical defects so far as I could tell." When rescuers reached the burning wreckage, they found Nanartowich and Lt. John D. Madre alive. Madre was still clinging to life, but unconscious the following day. Killed were pilot Robert K. Black, of Meridian, Georgia, Lt. Robert R. McKechnie, of Cleveland, Ohio, Lt. Allen M. Howery, of Russellville, Tennessee, and Sgt. Harry T. Jones, of Hempstead, New York. The passengers were Lt. James W. Stewart, of East Orange, New Jersey, who was returning to his station at Randolph Field, Texas, and Corp. J. E. Galloway, of Sulphur Springs, Texas, who was returning to his station in Dallas. The bomber had been heard circling Lagrange about 2300 hrs. and it was thought that the pilot was seeking an emergency landing field. Nearly two hours later a local share cropper made his way through the mud into town and told of the crash near his home. 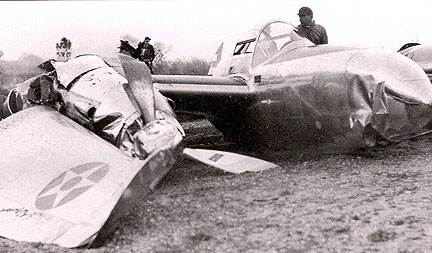 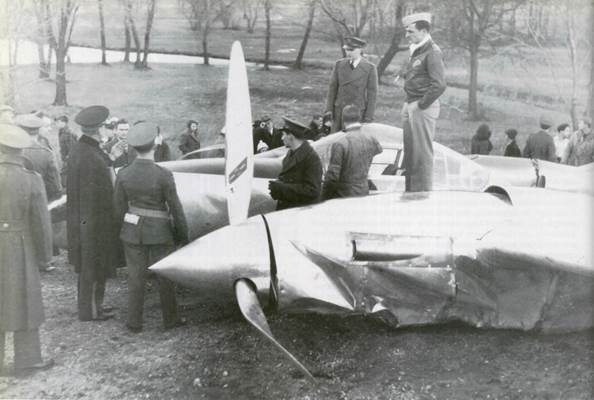 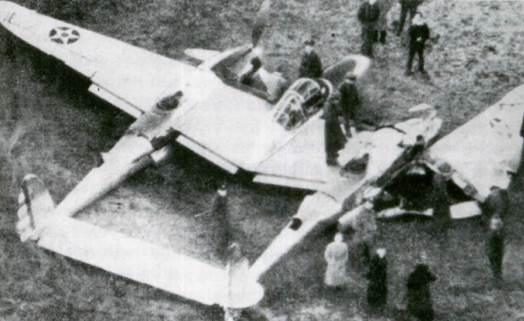 She was sleek as freshly peeled willow. As overalled mechanics trundled her out for the warm-up at March Field one day last week she gleamed slimly among the bulb-nosed fighters, the potbellied bombers on the Army Air Corps Southern California airdrome. Major General Henry H. Arnold, greying Chief of the Air Corps, surveyed with particular approval her twin engines, Prestone-cooled V12 Allisons of 1,000 horsepower each, faired trimly into the metal wing. Well he knew that broad-beamed radial air-cooled motors, such as the big U. S. engine builders have brought to perfection, could not be used on such a ship without protruding in speed-killing humps on the wing's leading edges, that only the Allison (TIME, Jan. 30) could do the job cut out for the new fighter.

When the engines had been warmed up, Lieutenant Ben S. Kelsey, one of the Army's ace test pilots, buckled his parachute leg-straps, climbed into her independent midships compartment (she is twin-tailed) and took off. Half an hour later he landed, and delighted Henry Arnold issued a statement to the press about XP-38, the Air Corps's break from pursuit tradition. The ship, said he, "opens up new horizons of performance probably unattainable by nations banking solely on the single engine arrangement." Kelsey had traveled more than 350 miles an hour in the test. He was satisfied the Lockheed was highly maneuverable, had more than 400 miles an hour in her.

Day after the test, Ben Kelsey took the ship East, stopped 22 minutes at Amarillo for fuel, lost another 23 minutes at the gas pit in Dayton. When he whipped over Mitchel Field on Long Island, just as the sun was setting, he was seven hours, 45 minutes (elapsed time) out of March Field, 2,400 miles away, and only 17 minutes slower than Howard Hughes's record non-stop transcontinental flight in a racing plane in 1937.

Swinging swiftly in a wide arc he squared away for a landing, let down his landing gear. Then came some more of the sort of bad luck that has dogged new Army ships of late. As Pilot Kelsey suddenly realized that he was falling short, he opened his throttles to drag into the field. Without so much as a cough his left engine died. Plowing her wheels through a tree, the XP-38, with right engine throttled, slammed into the sand bunker of a golf course, came to a stop with her right wing torn off, her props hopelessly snaggled, her fuselage twisted (see cut). A passing motorist helped dazed Ben Kelsey from the wreck. He had been only slightly cut.  (See another photo at bottom of page.)

Probably damaged beyond repair was XP-38. But in the Lockheed factory, at Burbank, Calif., were all the drawings, dies and jigs needed to make many more like her. Pilots said the twin-engined pursuit ship had joined the Air Corps.

Fails to Break Hughes MarkNew York, February 11 (1939)-(AP)- A new secret twin-motor Army pursuit monoplane crashed into a tree on the edge of Mitchel Field on Long Island tonight at the end of a near-record transcontinental test flight. The pilot and sole occupant, Lieutenant Ben S. Kelsey, crack test flier, was saved from serious injury by the plane's all-steel cabin.

He apparently overshot the field, observers said, and zoomed the motors to pick up speed and altitude. The right motor appeared to choke, sending him into a steep right turn.

As Kelsey cut the throttle again, the plane slipped down and sheared off the tops of trees bordering the field, the undercarriage caught in a thirty-five-foot tree, and the plane plunged down into a sand pit on the Cold Stream Golf Course. Bystanders pulled Kelsey out of the wreckage. He was taken to a hospital with cuts on one eye and one hand, and suffering from shock. He was released after examination.

Scores of cars jammed around the spot. Field officials threw a fifty-man guard around the wreckage and rushed the plane's instruments to the field office, their condition undetermined. Colonel James Chaney, field commandant, called an inquiry board into session immediately, with Kelsey present. The findings were expected to be kept secret and sent to Washington in an army plane. The weather at the time of the crash was clear, with a light shifting wind. At the time of the crash it was blowing southeast.

The plane was a new Lockheed, the Army's first twin-engined pursuit plane, completed at the Lockheed Burbank plant two weeks ago and capable of doing 350 miles an hour. It was an all-metal single-seater, with stratosphere operating equipment, tricycle undercarriage, and super-high lift devices. It was designed to carry a nest of high-power machine guns, but none today. Its designation was XP-38.

Kelsey, 33, is married and is regularly assigned to the laboratory division of Wright Field, Dayton.

The total elapsed time was 7 hours, 45 minutes, 36 seconds but Kelsey’s actual flight time was 7 hours, 36 seconds. The prototype had averaged 340 miles per hour (547 kilometers per hour) and had reached 420 miles per hour (676 kilometers per hour) during the Wright Field-to-Mitchel Field segment.
Kelsey’s transcontinental flight failed to break the transcontinental speed record set two years earlier by Howard R. Hughes by 17 minutes, 11 seconds. It should be noted, however, that Hughes H-1 Racer flew non-stop from coast to coast, while the XP-38 required two time-consuming fuel stops.

The prototype Lockheed XP-38, 37-457, being refueled at Wright Field, Dayton, Ohio, during the transcontinental speed record attempt, 11 February 1939. (Unattributed)
Reference: https://www.thisdayinaviation.com/tag/mitchel-field/
​Mitchelfield.weebly.com   Copyright 1973 - 2020.
All photos taken by Paul R. Martin III unless stated otherwise. All rights reserved.
No images or content may be reproduced without prior written permission. ​