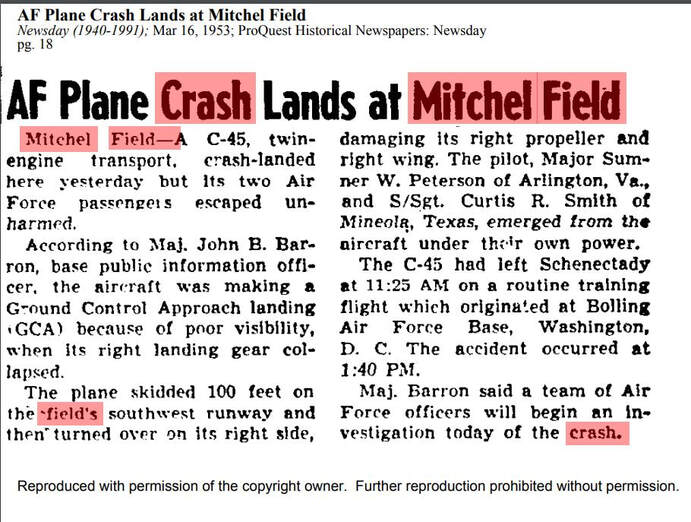 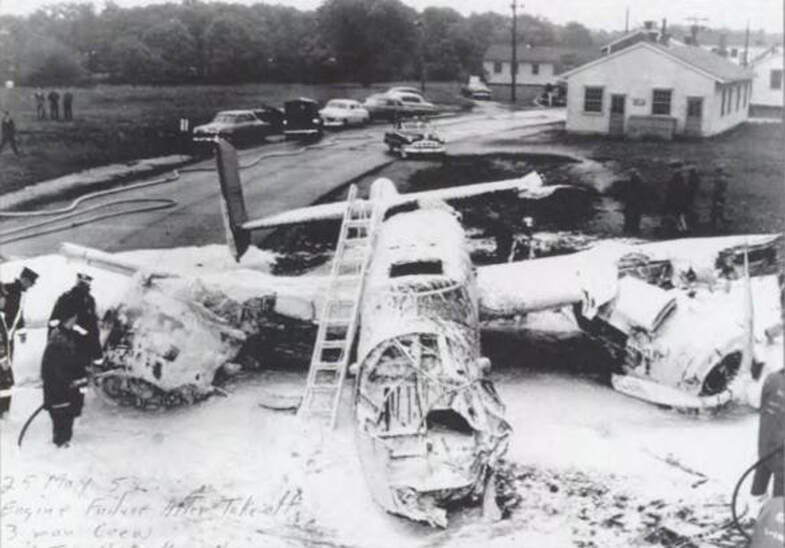 May 25, 1953: A B-25 forced landing in East Meadow after engine failure following takeoff.  All 3 crew members survived. This looks like it may well have landed in the Santini Sub-base area.
August 3, 1954: This crash did not originate from Mitchel AFB, but it's proximity warranted it's inclusion.
August 3, 1954: Fairchild F-84 G Thunderjet. "A United States Air Force fighter traveling from Delaware to Massachusetts, crashed into the middle of the street on Denver Road in Wantagh, New York. The crash and ensuing fire damaged some 30 homes on Denver Road, Dover Road and Roxbury Avenue." 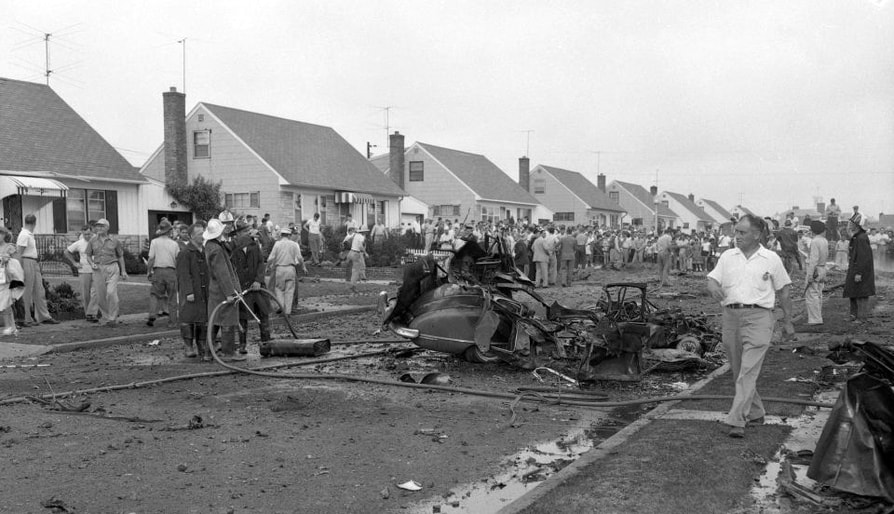 Three hundred residents and representatives of the Air Force and local groups attended the ceremony. It was conducted by members of the Wantagh Clergy Council, a nonsectarian organization of the community's religious leaders.  The Rev. James E. Boyd, pastor of the Wantagh Memorial Congregational Church, said that "the sacrifice of the pilot deserves sacrifices on our part in aiding the widow and the child."

13 September, 1955:
Six Airmen were killed when a North American B-25 suffered engine failure on takeoff from Mitchel AFB, New York, and crashed into Greenfield Cemetery, Hempstead, New York, five minutes after departure. Three of the victims were crew members, and three were AF personnel passengers. The names of the dead were withheld pending notification of next of kin. B-25J-35/37-NC, 45-8822, modified to TB-25N, then to VB-25N, was piloted by James D. Judy. 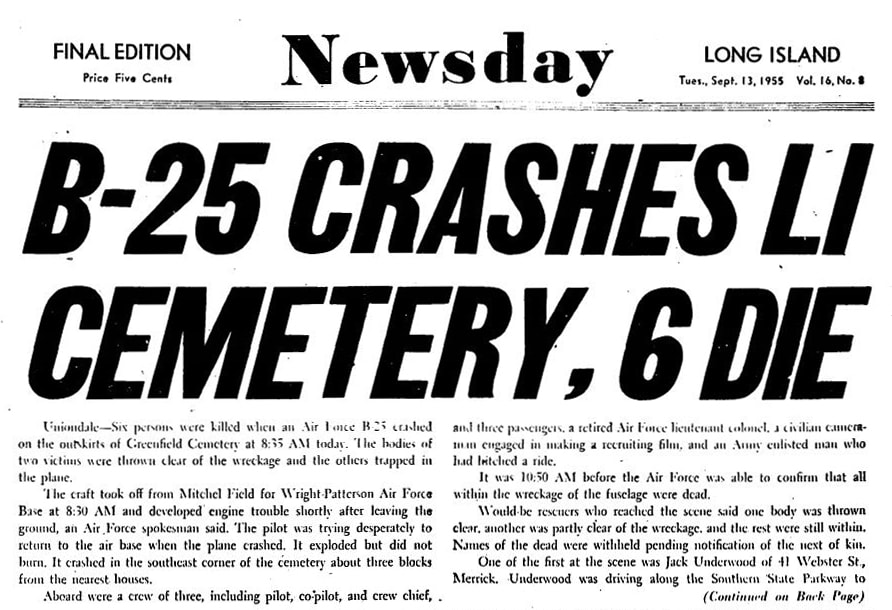 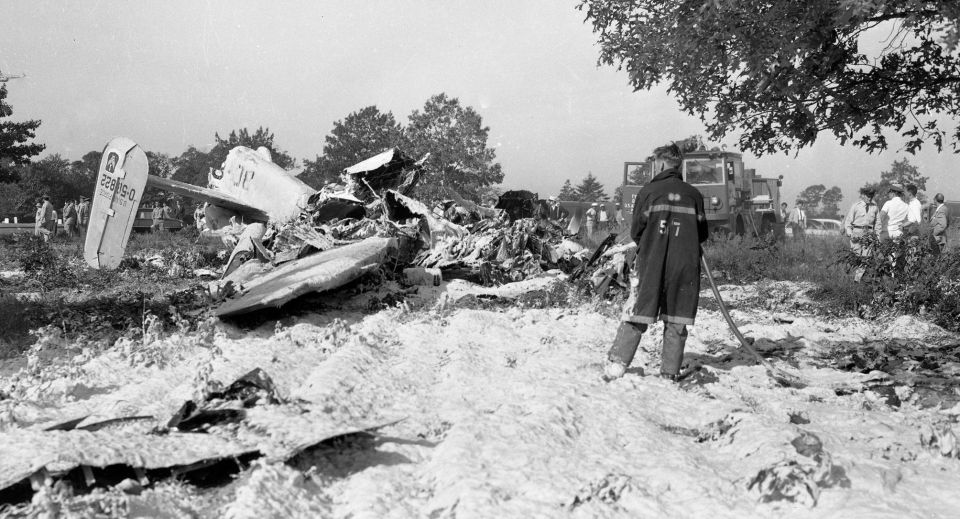 In June of 1954, Major James, “Don”, Judy, a 13-year Air Force and decorated WWII Combat Veteran of the 91st Bomb Group (B-17s)  and former POW, was transferred to Mitchel Field at Hempstead, Long Island. He continued recruiting duties with periodic flights to maintain his flight status.

Tuesday, 13 September, 1955, 8:30 AM. Mitchel Field, a U. S. Air Force Base on Long Island, only 20 miles from New York City. A bright sunny morning. A gentle breeze is blowing from the north, the temperature a refreshingly cool 55 degrees. Southwest of the airfield, at the Uniondale Grand Avenue School, 500 students are settling in to begin their classes for the day. Down the way on Grand Avenue, a bus carrying 27 late-arriving students approaches the school. Students at the nearby Uniondale No. 2, Franklin, Ludlum, and Hempstead Schools also are quieting down to work in their classrooms. On Cedar, Crowell and Meadow Streets, and the other crowded residential streets adjacent to Mitchel Field, housewives are proceeding with the morning chores and tending to their babies after seeing the older children off to school. On the nearby Southern State Parkway traffic is still bustling along as the morning rush hour slowly winds down.
At the west end of the main runway sits a weary, aging two-engine B-25 Mitchell bomber, serial number 0-58822. The engines are revving up loudly. At the controls, Major James, “Don”, Judy, a 13-year Air Force veteran. The copilot is Captain Richard E. Hall, another Air Force veteran. The pilots, Air Force recruiters stationed on Mitchel Field, are preparing for a routine flight to Wright-Patterson Air Force Base near Dayton, Ohio. They will log in the eight hours of flying time for the month, as required to maintain flight status. Four other men, one an enlisted airman also stationed at Mitchel Field, are aboard. Major Judy was planning on flying another plane to Washington, D. C. today to check his records prior to assignment to Europe. The pilot originally scheduled to fly the B-25 to Wright-Patterson became ill so Major Judy is flying instead.
The roar of the engines deepens. The B-25 begins lumbering down the runway, slowly accelerating in speed. Before reaching the end of the runway, it becomes airborne. The wheels fold back into the engine nacelles. Almost immediately the right engine cuts out. Major Judy radios the control tower: “Judy making emergency landing. Prepare for emergency. Judy making emergency landing. Over.” He feathers the prop and turns to the southwest to return to the field. Then, the left engine begins sputtering and loses power. Unable to gain altitude, the plane limps along at 300 feet.

​Major Judy fights the controls attempting to keep the wobbling plane in the air, as the tail
droops. They pass low over Uniondale School No. 2 and along the Southern State Parkway. Up ahead lies the Greenfield Cemetery, the open southeast corner of which is being developed for new grave sites. Beyond the cemetery are the Uniondale Grand Avenue, Franklin, Ludlum, and Hempstead schools and the congested residential streets. The B-25 suddenly swerves downward as Major Judy steers the plane towards the open area in the cemetery. He apparently believes the plane may not remain airborne to reach the runway at Mitchel Field. He does not want to risk falling onto a school or going down in the crowded residential area.

The B-25 settles quickly to earth in the open space in the Cemetery, exploding upon impact with the ground. There is no fire, only twisted wreckage strewn about the cemetery..  Just 1,500 feet away, the 500 students at the Uniondale Grand Avenue School continue their studies unaware of what has just happened. Although they may read about the plane crash in the evening newspapers, in the diverting excitement of their youthful lives, the students will never realize the magnitude of sacrifice made for them. The school bus stops. Twenty-seven giggling, pushing students skip happily to the front door. They are too young ever to comprehend fully the price that was paid to keep them out of harms’ way. In the nearby homes the housewives continue their morning activities. They, too, will remain oblivious to the sacrifices that had been made to ensure their safety.
​James Donald Judy:  BIRTH: 11 Jun 1920 Washington, USA
DEATH: 13 Sep 1955 (aged 35) Hempstead, Nassau County, New York, USA
BURIAL:  Fort Lawton Cemetery
Seattle, King County, Washington, USA MEMORIAL ID20148927 ·

Mjr. James Judy was killed when the North American B-25 he was piloting suffered engine failure on takeoff from Mitchel AFB, New York. He flew it away from schools and populated areas prior to the crash.

DSC Citation
The President of the United States of America, authorized by Act of Congress July 9, 1918, takes pleasure in presenting the Distinguished Service Cross to Second Lieutenant (Air Corps) James D. Judy (ASN: 0-737963), United States Army Air Forces, for extraordinary heroism in connection with military operations against an armed enemy while serving as Pilot of a B-17 Heavy Bomber in the 322d Bombardment Squadron, 91st Bombardment Group, EIGHTH Air Force, while participating in a bombing mission over enemy-occupied Europe on 17 August 1943. 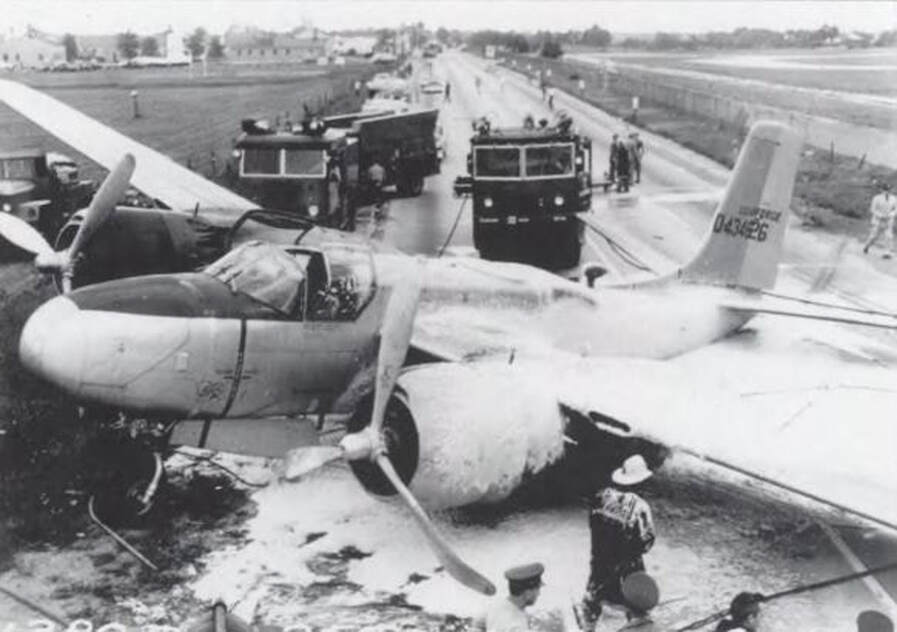 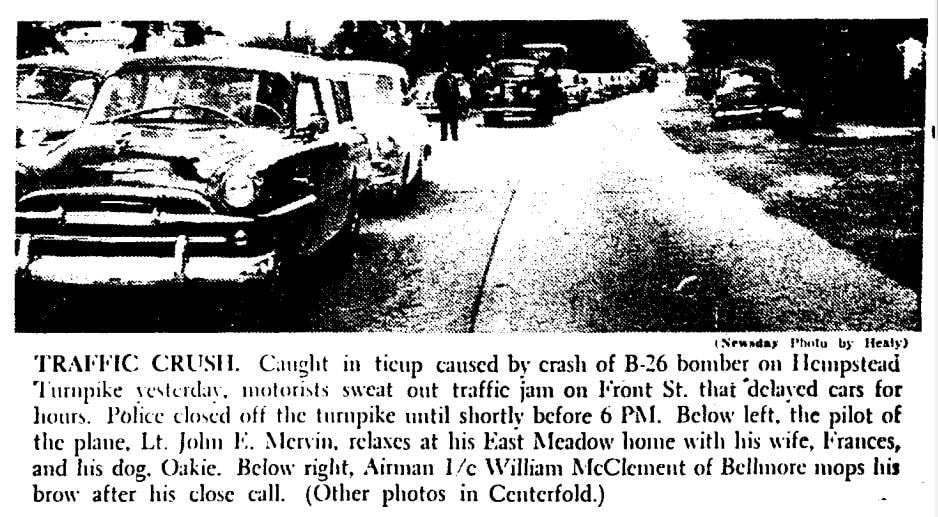 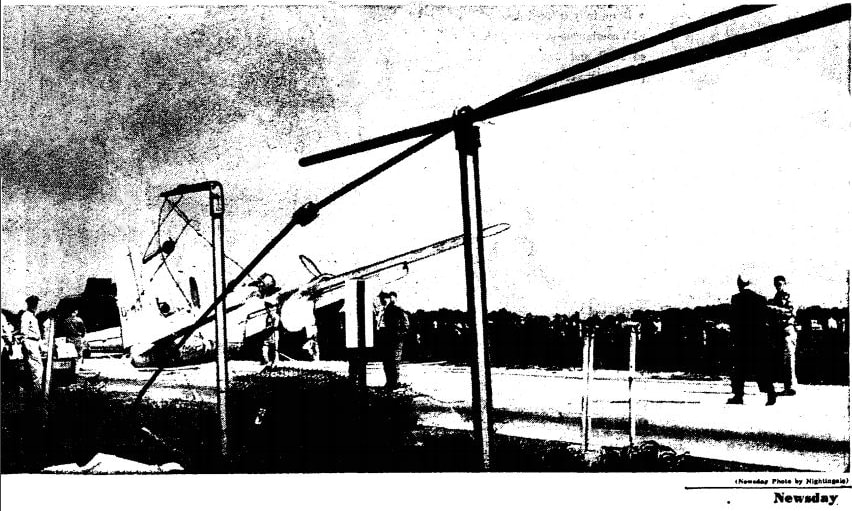 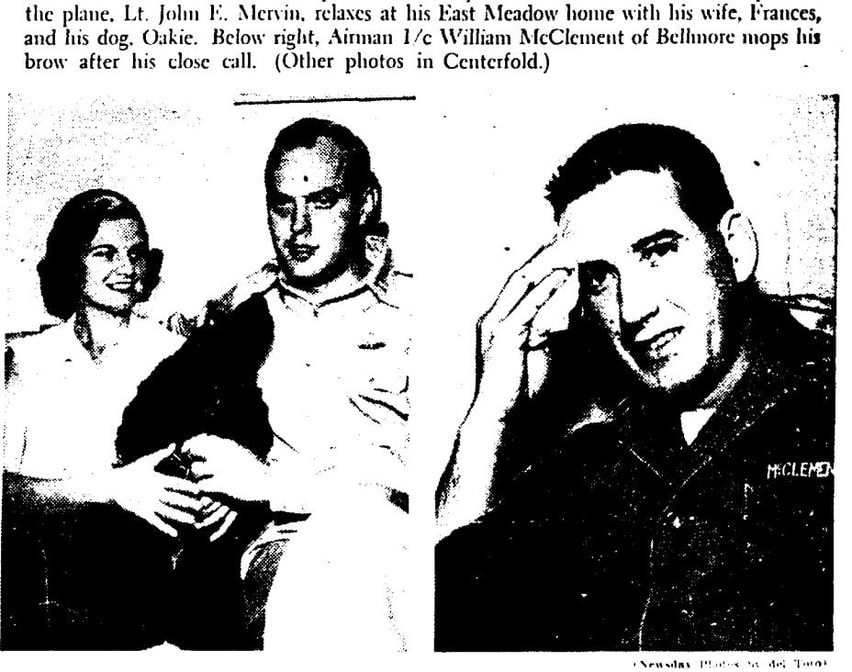 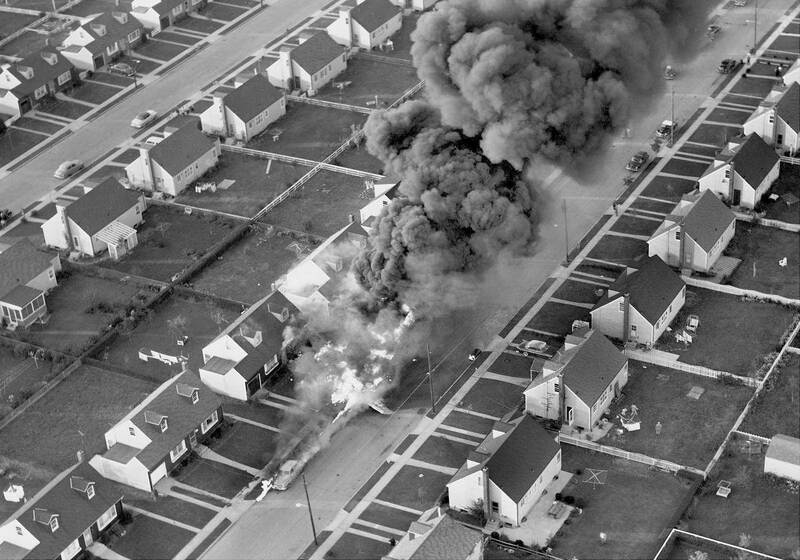 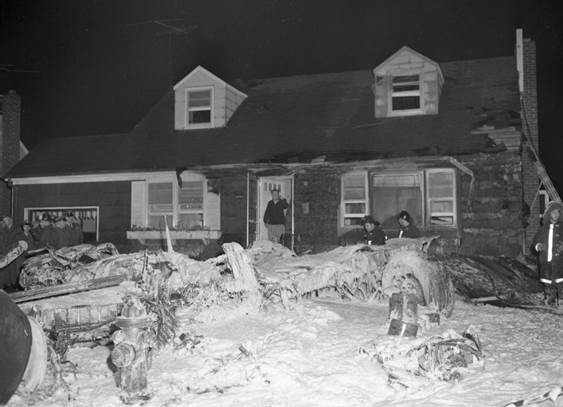 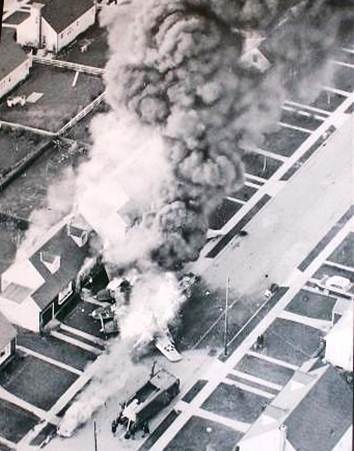 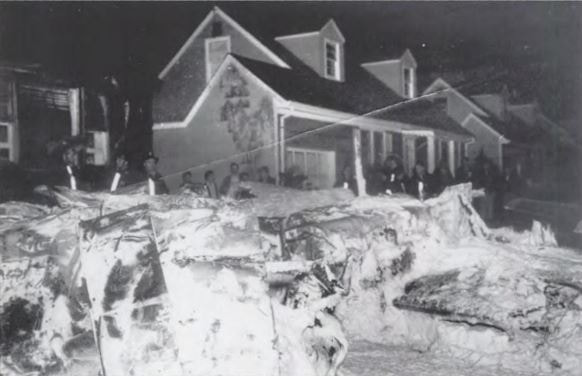 Foam covers a B-26 airplane that crashed against a home on Barbara Drive in East Meadow on Nov. 2, (3) 1955. The Air Force plane crashed into the houses. Both the pilot and navigator were killed, but there were no ground casualties.