"Nazi Nabbed at Mitchel as Traitor"

The ODD but TRUE story of Lt. Martin James Monti

"Nazi Nabbed at Mitchel as Traitor" Every once in a while you find something that makes you go Huh? I found this 1949 Bowman Bubble Gum Card, "Rendezvous at Mitchel Field" from the "America Salutes the FBI – Heroes of Law,” card series. Obviously it piqued my interest and upon further investigation, here is the ODD but TRUE story. From my forthcoming book. Enjoy! Thanks, Paul Martin.

Note the mis-spelling of both Mitchel Field and Monti's name.

​The Bowman Gum Company produced this interesting 36-card set in 1949.  Titled, “America Salutes the FBI – Heroes of Law,” these 2 1/16” x 2 ½” cards use colorful artwork depict the crime-fighting efforts of America’s national law enforcement organization.  Cards are printed on either white or gray stock, and feature a colorful image on front, with captions printed in black in the lower border.  The reverse is printed with red and blue ink, with details and text supplied by “G-Men Detective Magazine,” which was a pulp fiction periodical of the era.  Card backs also contain a mail-in offer for various law-related items.
Martin James Monti was born in St. Louis MO on October 24, 1921. Monti’s father was an investment banker and son of an Italian immigrant. His mother was Marie Antoinette Wiethaupt of German-American decent.

Monti enlisted in the Army Air Forces and began flying training in early 1943. He qualified in the P-39 Aircobra and P-38 Lightning and received a 2nd. Lt's commission before shipping out to India in August of 1944, attached to the 126th replacement depot in Karachi.

Starting on October 1, then a 1st Lieutenant, Monti began an elaborate improvised charade. He talked his way onto a transport plane headed for Cairo, and then “hitchhiked” by air his way to Naples Italy via Tripoli by October 4. On October 10 he finagled his way to the large airfield at Foggia. Some of his friends from flight school were at the station. After an unsuccessfully spurious attempt to arrange assignment to the 82nd
Fighter group based there, he worked his way to the 354th Air Service squadron at Pomigliano d’Arco.

​On October 13 he impersonated a pilot from the 82 Fighter group and stole a Photo reconnaissance P-38 Lightning. He took off at 12:30 and two hours later landed on a small airstrip outside Milan and turned himself over to the Germans.
​Eventually German Officers realized Monti’s offer was serious. He volunteered as an Anti–American agent and propagandist. Monti produced pamphlets and wrote and recorded radio broadcasts as Captain Martin Wienthaupt, encouraging American troops to ally with Germany and fight against the Communist Russians. Monti joined the Waffen SS and continued his propaganda campaign from Berlin. By April 1945 he made his way back to Italy as the war ended in Europe.
Monti, wearing his SS uniform, was on a train with other German officers when he surrendered to American forces at Fifth Army Headquarters. He explained the uniform was given him by Italian Partisans to help him escape and that he also was gathering intelligence for the Allies. He later claimed he had flown his P-38 against the Germans and was shot down and taken prisoner.

Eventually the military paper trail from India caught up with him and he was charged with being AWOL, desertion of duty, and misappropriating government property. At his court-martial, Monti was sentenced to 15 years hard labor. On January 3, 1946 he was brought back to the US as a prisoner and sent to Green Haven Prison in Beekman/Stormville NY.

​His sentence was commuted on February 4, 1946 to time served. As part of the commutation, Monti was required to re-enlisted in the Army Air Forces as a private at Green Haven, transferred to Elgin Field, Florida, and then reported to Mitchel Field. He rose to the rank of Sergeant.
​“The reason for his presence at Mitchel Field on the date of arrest is that he was then an enlisted man (Sergeant) in the Army of the United States (U.S. Air Force). This was because he enlisted in 1946 in order to comply with a Presidential order remitting the then unexecuted portion of a court martial sentence imposed on or about September 18, 1945. That order was to be 'effective upon his (Monti's) enlistment in the Army of the United States.”
In an unexpected turn of events that terminated the anticipated lengthy trial, Monti pleaded guilty on the first day of deliberation. Federal Judge Robert A. Inch, would not accept the plea without the defendant making an open confession in court. Monti was ordered to the witness stand where he calmly admitted to all the allegations and answered several questions under cross examination by special assistant attorney general Victor C. Woerheide. Finally judge Inch asked, “Did you do it voluntarily?” “Yes” replied Monti. “That’s enough for me!”, Declared the Judge. 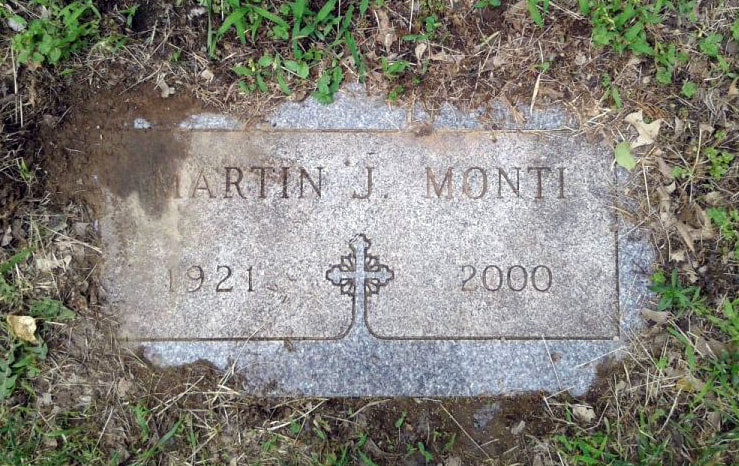 An excerpt from the forthcoming book “Fallen Eagles: Forgotten Sacrifice on the Homefront,
by Paul R. Martin III